Have you ever watched a corporate video and wondered how long it took to make? They seem very straightforward, but can it all just be created in a day or a week? How long is needed to make a corporate video?

The corporate video production process typically takes 4-6 weeks to finish the development, pre-production, filming, post-production stages, and editing stage. If the video is longer than 5 minutes, that can be extended to 8 weeks. In the final delivery, a video production company will typically include live-action scenes, interviews, b-roll, and motion graphics text.

So, it takes time to produce videos of quality, but what exactly is involved at the different stages of the video project? Read on to learn more.

How Long Are Corporate Videos?

There’s no standard length that production companies adhere to, but most corporate videos range from a single minute to 5 minutes in length. 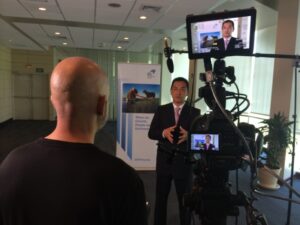 Even the production of a 1-minute video can take a few weeks, which seems excessive for such a short video length, but don’t forget that the final product has to be something that creates a strong and lasting impression of the business that process takes time.

If a company is willing to settle for low-budget videos without any special effects, graphics, or other particular media requirements, then, generally speaking, a very short video could be finished within a week.

However, the fact is that the vast majority of companies are not willing to settle for that. Let’s start from a point where a company has decided to make a video and has hired a production company service to shoot a high-resolution 5-minute corporate video.

Before a corporate video production can go into the pre-production stage, there is a stage of development in which a team will discuss how to make this an effective video.

They’ll discuss the brand, its guidelines, and goals and create a general overview of what video type they want and how the video will fit in with its overall marketing plan.

Before a production team starts filming, they have to complete pre-production. This phase involves mapping out the video content, script writing, and editing to produce the final shooting script, possibly casting people in the video if necessary or doing voiceovers.

Not all corporate videos feature actual employees of the company. Once they have a concept of the video structure, they will map out the content in more detail using a visual mock-up or storyboard.

At this stage, it’s critical that all ideas are brought forward and that if someone has a better idea than an existing one on the storyboard, it needs to be put forward, subject to feedback, further enhanced, and then added in.

If there are going to be script changes, for instance, it’s best they’re made at this stage and not later that could result in spending more hours having to re-shoot scenes.

Once the details are finalized, the team is clear on all the steps needed to gather what footage they need to shoot and in what locations they lay down the final plans.

One important thing they need is a shot list featuring those shots that will feature any interviews, locales of the business for live-action shots, background shots for displaying graphics, and additional b-roll to help connect different scenes.

With all pre-production preparation done, the team can now work on what is known as creative execution, most of which is spent shooting.

Producing enough footage to use in the post-production phase is critical, so it’s normal for teams to do multiple takes of the same shot to create choices for the editing team working in the final stage.

Once the primary camera work is done and the footage collected, the producer sets to complete the voiceover recordings. The raw recordings will be worked into a final sound mix in the post-production stage.

As a general rule and to preserve the production time frame, those producing the videos will try to lock down all details of the project before this filming and voiceover stage begins. However, if they are forced to make changes to the project, it’s at least less troublesome than doing it in the post-production phase.

After producing all the raw footage, the video production team moves into the next stage, where they perform the first edit and create what is known as a rough cut.

They’ll go through the voice levels, add in sound mixing, visual effects, and connect the important scenes and voiceovers with b-roll that helps to establish context.

The finished film will need to be of very high quality, coherent and engaging, which is why this stage is the most important part of the production process.

After creating the first edit, the team will get feedback from the client and production leaders, which they will then spend more hours working on improving further before a final review.

When all the scenes and connecting b-roll have been finalized into an approved order, this is known as getting the “picture lock.” It’s a time-consuming process, but the production will go on until the desired effect is achieved.

After creating the final edit, the video can be distributed.

How Long Does it Take to Make a 1-Minute Corporate Video?

A typical example of a 1-minute video could probably be created in about two weeks if working efficiently. It could take up to 4 weeks if there is a need to shoot locations that require particular weather or light, or if the team wants to take some time to find a suitable voiceover artist or actor to appear in the video, and so on.

Videos of even such a short length as a minute still have to undergo the same production stages mentioned above. However, the overall time frame will be shorter since it won’t take up as much time to prepare the ideas, shoot the main footage and b-roll, and complete post-production steps.

A shorter video does reduce the overall production time but not the required number of steps in the process.

How Long does it Take to Make a 5-Minute Corporate Video?

It’s hard to imagine that just adding 4 minutes to a video could make it so much harder to produce, but it does.

Where a video of 1 minute could be finished in 2-3 weeks, there’s little chance of a high-quality example of 5-minute corporate videos being finished inside of 4 weeks. They very often exceed that time period, stretching up to 8 weeks in length.

It may seem amazing to spend up to 2 months working on a video of 5 minutes. Still, companies know well that these short videos can be used across multiple marketing channels to great effect for a long period, possibly a year or more. It will form a core part of the overall marketing strategy.

How Much Does a Corporate Video Cost?

One final question is how much companies typically budget. For 1-minute videos, a production budget of about $3,000 is about the average in the industry.

The more complex it is, the closer to that $3,000 threshold you will get. When we say “complex,” we mean what production level you use, including high-resolution video, high-quality graphics, etc.

For a longer video, you should take that same budget and multiply it for every additional minute of video footage created. So, if the video is 5 minutes long, the total cost will be $15,000.

The exact amount will depend on factors pertinent to individual enterprises, but these are a good rule of thumb. For more information be sure to contact Braun Film.