How Long Does It Take To Make A Documentary?

How Long Does It Take To Make A Documentary?

A documentary is a film or a non-fiction video that educates viewers about an event, person, or real-life topic. If you are a company that needs a documentary created, one of the first questions that will come to mind is, how long does it take to make a documentary?

Want to learn more about these three phases of documentary production and what they entail? Read on to learn more.

Pre-production is the first phase in the filmmaking process. It happens before production and after development. At this stage, we finalize the script, identify the shooting location, and secure the equipment and personnel needed to execute the production. This is a stage that involves planning, where Braun & Film Video Inc puts together all the details of the entire project.

This section is crucial because it enables us to get organized before starting to film your documentary. At this stage, we figure out the people and things we will need and how much they will cost.

Planning time is inexpensive compared to all the people and equipment needed to execute the shooting of the video production, so thorough pre-production is key to staying on time and on budget.

Knowing the logistics needed also enables us to better manage the budget for the entire production. Frequently during production, money from the budget will flow from one phase of production to another as unforeseen circumstances present.

At the pre-production stage, we do our best to address these potential needs while still honoring the creative vision for the show.

Pre-production is also when our producers create a schedule for shooting and editing the documentary. Time is a vital and costly resource in the world of video production; We do our best to anticipate and plan for potential hiccups like bad weather on an outdoor shoot day, which can otherwise be a costly setback.

Another vital aspect of pre-production is planning. All the departments need to collaborate with the producer and break down what they need to do correctly to achieve the desired goal. There may be a need for creating a shortlist, scouting, set and prop considerations, and gaining clearance and getting permits, among other things.

The final stage of pre-production, if required, is the rehearsal. If employing actors, re-enactments, etc., and before starting to shoot, producers figure out the physical and emotional logistics of every scene.

This stage helps ensure that everything needed is in place and nothing is falling through the cracks. Depending on the project’s complexity, the entire pre-production phase can take four to six weeks or more.

The production phase entails all of the original shooting required for the documentary.

This stage of production will vary depending on need, but will typically takes at least one to two weeks, or more. This step is the quickest of the three (pre-pro, production, post-pro) thanks to all of the diligent planning that took place during the first phase, pre-production. 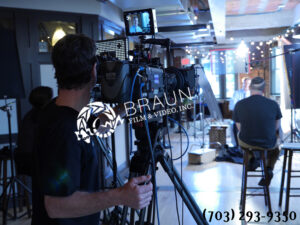 The production phase involves primarily shooting interviews and following our subjects. We could be shooting various types of activities and material depending on the subject matter of the documentary.

If we are doing a documentary that tracks a modern-day person’s life as they try to achieve something, we could be filming them as they do something to accomplish their goal.

If we are doing a historical documentary for an organization or event, it will likely involve many interviews and archival material. Archival material is researched and acquired by our production staff or provided by our client, and may include old video, still photographs, newspaper headlines, magazine clippings, etc.

Many of these materials will be digitalized for editing, but others may be originally shot on camera during production. Getting the necessary clearances and permissions to use archival material is a critical step that is not to be overlooked, lest our production be subject to copyright infringement violations. Sometimes there are rights and usage fees associated with acquiring archival materials.

During the shooting/production stage, it is crucial to stay one step ahead in planning for the next shot/shooting location. The main aim is to stay on schedule and on budget, which requires discipline and foresight.

Remember, the production phase is the most costly of the three stages of production, and ‘missing’ something or having to re-shoot something, will have a significant negative impact on the schedule and budget.

As with any phase of production (or any professional undertaking, for that matter), it is crucial to have proper and healthy communication among all parties at this phase.

Ensuring all involved parties understand the goals and objectives of each and every undertaking during the production phase, is the most foolproof way to ensure that we complete this stage of our documentary with all the source footage we require.

The final phase is the post-production stage, where all of the editorial and ‘finishing’ work takes place. This phase takes 2-6 or more weeks. It is the most labor-intensive because it involves reviewing, organizing, and transcribing all of the footage, in addition to all technical editing and assembly of the documentary. This is where specific contributions can be added, like sound design, visual effects, narration, music, etc.

Video editing can be time-consuming, depending on the length of the project and its level of complexity. A feature-length documentary will start with paper editing or compiling the interview transcripts. The transcripts give a sketch of the film structure before editing any footage.

For a shorter video, we will typically jump right into the video editing phase and simply make adjustments ‘on the fly’ where the content does not match what we had projected during pre-production.

Frequently when doing documentary work, we find ourselves discovering and exploring an unanticipated aspect of the story that our planning and writing did not account for. Finding these hidden ‘gems’ can be one of the most exciting and fulfilling aspects of documentary production.