A premier video production company in the Washington, DC area

We’ve worked on 5 continents and produced video in over 15 languages.

Capabilities include development and execution of the following:

We offer full-creative services and work at the highest industry standards both in terms of the equipment and suites we utilize, as well as the caliber of our personnel including Directors, Scriptwriters, Creative Directors, Art Directors, Camera Operators, Editors, Animators, Sound Designers, etc. 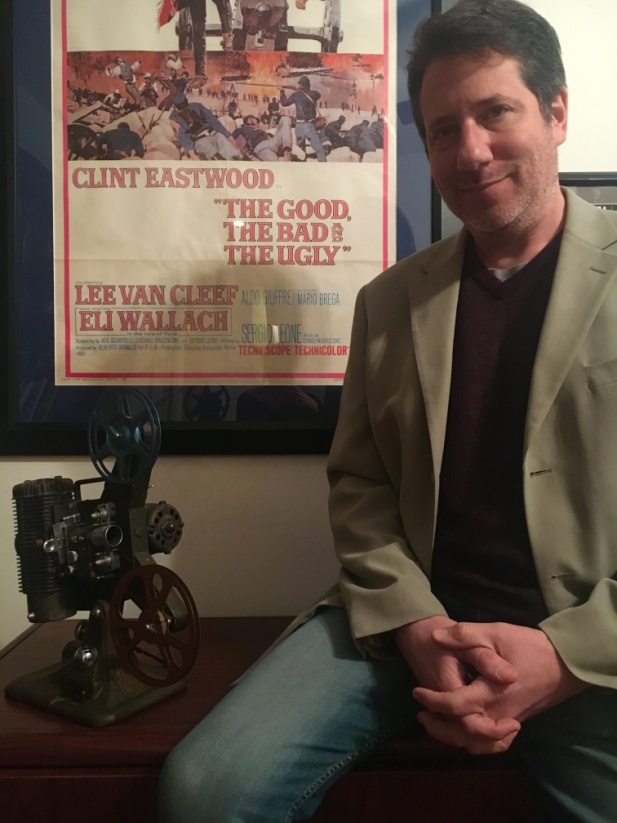 Dave brings over 2 decades production experience, including founding Braun Film and Video, Inc. in 1992.  Since that time, he has produced scores of commercial, corporate, documentary, training, political and educational programs as well as countless other shows including PSA programming, broadcast television and radio and a multitude of other productions.  Dave’s knowledge and expertise run the gamut from campaign development and creative, to production and post production, to distribution and tracking of programming in all formats. Dave’s client skills, attention to detail and ability to communicate are unparalleled, and set the tone for everyone on the Braun Film team.

Favorite Job: For seven years we owned and produced a weekly Washington Redskins television program featuring former and current players.  Meeting and working with players whose jerseys I used to wear as a kid, and whose cards I used to tack to my wall, was a thrill that even by year 7, never got old for me.  In fact, I still nurture my fantasy of playing quarterback in the NFL…

Best thing about my job:  Without a doubt – the people.  Through this career I’ve become dear friends with many of our clients, vendors and freelancers.  It’s a ‘bonus’ part of the job that I never contemplated when I first started out in this industry.

Best work story: September, 2001.  Minneapolis, MN.  Had just wrapped a shoot at the Minnesota Vikings training camp, and was waiting for my flight with some of our crew at the airport bar.  This being a mere couple weeks since 9/11, airports were on high alert, and we had unfortunately left one of our large, steel equipment cases on the sidewalk unattended.  One of the porters indentified me to the authorities, and the next thing I knew, I was greeted by 3 machine gun carrying police officers in flak jackets to ‘escort’ me to the back room where I was VERY thoroughly questioned.  Still made my flight though…

Other facts about me:  I’m a huge music geek.  My music collection has over 12,000 songs covering just about every category.

Gary has over 20 years experience serving an international clientele in a multitude of production roles.  Whether in the field, in the studio or on location in a remote locale, Gary’s organizational skills coupled with his ability to troubleshoot and adapt help maintain our reputation for delivering on time and on budget.   He has vast experience producing all styles of programming in all HD formats for clients including Fortune 500 corporations, government and associations, non-profits, political consulting firms, ad agencies, PR and marketing firms, media buying agencies and small and medium sized businesses.   Gary is also a regular contributor to “The Tony Kornheiser Show” podcast.

Favorite job:  Many great ones, but my favorite was the “Behind the Scenes – Sports Illustrated Swimsuit Edition” video.  A very small crew, on the sand of a private island with Anna Kournikova as the featured model – there’s nothing like working in flip flops!

Best thing about my job:  Every day is different.  I love learning about new issues, products, causes, etc. and then working with our clients, using video, to help them achieve their goals.

Best work story:  Almaty, Kazakhstan – 2012.  We pull up pre-dawn to a 20+ year old Russian Helicopter for a day of shooting aerials.  This chopper was hardly the ‘picture of confidence’ but the crew seemed legit (despite the language barrier) so we gave it a whirl.  Good thing we did.  We were rewarded with beautiful scenery and an amazing day! 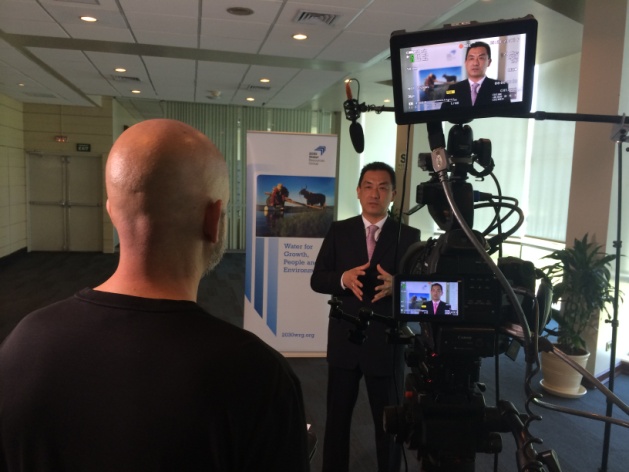 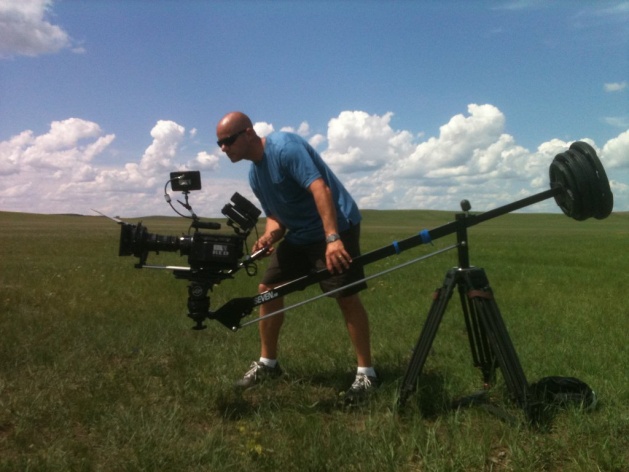 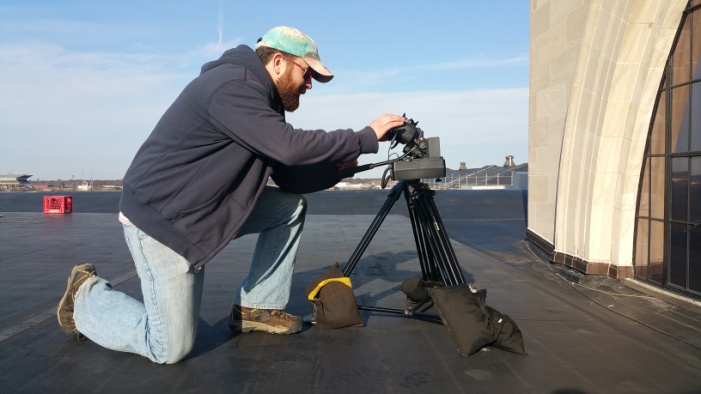 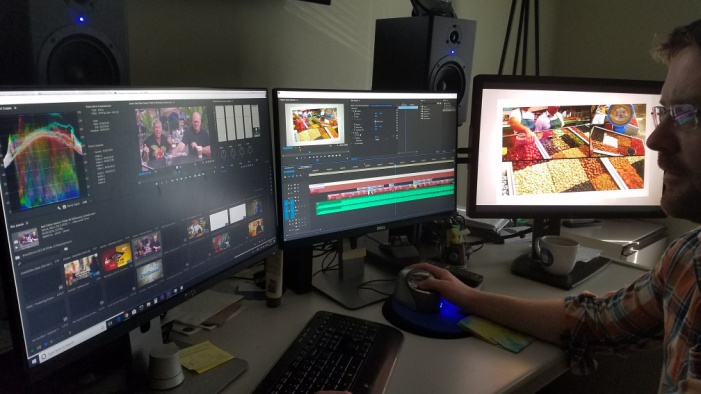 Jay is an accomplished and versatile broadcast media specialist, whose talents are as broad as his experience.  For over 15 years, he has honed his skills both on location and the edit suite.  In the field, he has performed a multitude of production roles, including director of photography, both across the country and abroad.  His keen eye for lighting and composition combine to make him an accomplished ‘interview look’ and ‘b-roll’ shooter.  In the edit suite, he is a gifted story teller and an imaginative and inventive graphic artist and motion graphic designer. His ability to thrive in both production and post-production environments make him a valuable asset to any production.

Favorite Job:  My favorite job, prior to entering video production, was at a Mom n Pop pizza shop. I made it a point to treat each pizza with special attention because I knew it was my work going out the door to serve the customers. That same ‘pride of ownership’ still applies to the work I do today. Can’t lie though…I also just enjoyed playing with the pizza paddle.

Best thing about my job: I get paid to shoot and edit video. These are my favorite things to do when I am NOT at work, so that’s pretty darn great. Every video we work on is different so it keeps things interesting. We may be shooting in DC one day or traveling to another locale the next. Or sometimes, I am neck deep in editing and graphics which is alright by me! I enjoy the variety.

Best work story: The coolest moment for me was while working on a job in Kazakhstan. Every day we were traveling to visually amazing places to gather footage and one of those days we took an unforgettable helicopter ride. We flew over sand dunes, through a canyon, next to snow covered mountains, and landed next to a riverbank for a break before heading back to town.

Other facts about me: In my spare time I am a super hero with the special ability to run at average speed.

Jeff’s technical expertise is surpassed only by his creative abilities. An accomplished editor with over 25 years’ experience, Jeff is at the fore of the constantly evolving fields of design, animation and motion graphics. His ability to bring a concept or vision ‘to life’ on screen, from scratch, makes him a valuable asset; His ability to do so quickly and on budget makes him an essential one. Whether a unique logo treatment, rich composite or overall ‘look’, Jeff is as proficient at designing elements independently as he is at constructing them under close direction and supervision. His experience runs the gamut from corporate and music video to features and everything in between.

Favorite job: Impossible to single one out, but special effects are always a fun challenge. I like to explore what is technologically possible and invent new, creative ways to problem solve.

Best thing about my job: My job demands technical proficiency. I love technology and have built just about every system I’ve ever edited on – not to mention ALL the edit systems in the Braun Film studio today. I enjoy trying to stay on top of, and up to date with, the ever-evolving field of post-production technology.

Other facts about me: I am an avid Jazz music fan and cyclist – I bike to work whenever possible. I like to spend time with my wife, daughter and son in my free time. I’m also allergic to onions.

Have you ever watched a corporate video and wondered how long it took to make? They seem very straightforward, but can it all just be created in a day or a week? How long is [...]

How Long Should a Documentary Be?

We live in a post-truth world where educating ourselves on crucial issues and looking for reliable sources of information is important. Documentaries are a great way to share and dissect important topics captivatingly and often [...]

How Long Should A TV Commercial Be?

From concept to completion, TV commercials require a great deal of work. Before the filming, the idea is mapped, scripted, and illustrated to understand how the commercial will progress. TV commercials are typically 30 seconds [...]

Have an immediate or future project? Feel free to contact us to learn more about our production services and rates.